Design starts with understanding the tribe, its people, and their culture.

Before the destruction that came with European settlement and colonization, the land, climatic region, local materials, and cultural factors influenced Indigenous architecture. Their cultural heritage and respect for the land and environment informed their architectural design. Most indigenous tribes were invaded and attacked by European settlers who displaced them from their land, destroyed their traditional homes, and attempted to wipe away their culture. Today, Indigenous people are reclaiming their culture, language, and history through new architectural design styles.

A Personal Approach
As a Native American Pueblo woman and an aspiring architect, I understand the importance of cultural preservation through the built environment on tribal lands. During my career I’ve been fortunate enough to work with three different tribes in the southwest. While discussing design approaches with each tribe, a common conversation concentrated on the protection of the people, community, languages, customs and beliefs, art, and natural resources.

Most often, traditional spiritual beliefs are the foundation of Native architectural design approaches. Designers are challenged to create hybrid indigenous architecture that will embody their culture and traditional building forms with contemporary building practices and technologies that correspond to their modern lifestyles. Timeless architecture can be achieved through a merge of historic representation and modern day innovations.

How can we, as architects and designers, express tribal identity through designs led by Indigenous spiritual and mythological anecdotes?

With a limited amount of Native American architects available to tribal communities, many tribes hire architects and design professional outside the tribal reservation. This can pose a challenge between an Indigenous client and a non-indigenous architect who may disregard or have preconceptions of their cultural values. The architects are challenged to understand tribal culture through community interaction and propose appropriate design concepts that won’t translate into a stereotypical motif.

As mentioned before, I worked with three tribes; Apache, Navajo and Pueblo. All three tribes reside in the southwest, all with different cultures, traditions, languages, and ancestral dwellings. My Pueblo culture differs from the Apache, Navajo and the other 570 federally recognized tribes in North America. Due to these inherent cultural differences, myself and other architects must work to engage the community in discussion during our design process, in order to learn the tribal client’s values and traditions.

A majority of Indigenous traditional knowledge was never written, but instead expressed through oral tradition. Oral tradition has helped preserve the culture and traditions for many centuries. These stories can aide designers in understanding the culture, that enforces the design, which will honor their traditional aspects they value as indigenous people.

Design goals, visions, and desires are verbalized by tribal members during community meetings. Spoken narrative of history, culture, tradition, spirituality, and the environment is a mode of communication and education amongst indigenous people. Listening to their stories can give us a better understanding of the different ways the indigenous people experience life through their culture. In most tribal communities, decision making is communal. Design decisions should be discussed with tribal leaders and elders to ensure respect to the sensitivity of cultural philosophies.  It is important to understand and recognize the distinction of all tribal cultures and traditions, since a utilization of motifs and symbols may be an inappropriate design approach that varies from tribe to tribe.

Integrating a Belief
Utilizing symbolic design through architecture can express a small portion of tribal identity without becoming stereotypical. Design strategies should reflect the engagement of the visitor through indigenous cultural methodologies. Indigenous people remain devoted to their cultural practices, are harmonious with the land, and continue to preserve their ancestral beliefs.

Indigenous people are interconnected to all living things as they acknowledge their existence in the natural world. The environment, plants, and animals play a key role in the indigenous lifestyle because of the bestowed resources that influence their cultural connection to nature and land. There is an importance to gain appropriate context through design and the natural environment. The physical characteristic of indigenous architecture must imply the story of cultural preservation, historic attributes, and their cosmic and mythical references. For instance, the circle is embraced in most indigenous cultures representing the inter-connectivity of life’s values.

Indigenous Architecture of the World
Architecture has the unique ability to tell the story of its place and time. Current designs are determined by economics, technological innovations, and changing societal needs. Designing future indigenous architecture should explore the idea of merging modern innovative design practices with historical cultural concepts, and sustaining traditional design methodologies.

Indigenous architecture creates a dialogue of their culture, educating both Indigenous and non-indigenous visitors. Despite all the suffering and discrimination that has progressed through the centuries, Indigenous tribes perceive their contemporary architecture as a way to expresses their cultural heritage.

I’m grateful to have grown up on a Pueblo reservation, one of the few tribes who still inhabit their ancestral lands and homes. Pueblo culture and identity remains deeply rooted, as aspects of the community start to progress with modern times. As the world advances in innovative technology, building materiality, constructability, and sustainability, all while Native American architecture has been encapsulated in the past. I argue that Pueblo communities can remain true to their cultural paradigm, while also thinking outside of the traditional materiality of adobe and vigas.

The exploration of contemporary materiality and form should highlight the culture, spirituality, and the relationship to the natural world. Our buildings should utilize innovative technologies guiding our people into a modern world. A small step is reemphasize the importance of the sun not only culturally, but through use of sustainable building tools, such as passive solar design and photovoltaic solar technologies. As an aspiring architect, I’m designing for indigenous people who inhabit the land, have progressed through the ages, and continue to transform their culture in a modern era, advocating for their indigenous cultural permanence and resilience. 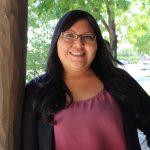 Juliet is an intern architect at Studio SW. Her native culture has influenced her to pursue architecture and find the balance between culture and modern design. Juliet sees the value in honoring the natural environment and cultural representation with each project.